As with the previous post, not so sure whether folks are still here, but hey! I did a thing. c:

This script was included with the 5.1 ch blue ray collector's box set in Japan in 2015. Also included were interviews (which I'll get to eventually), and the Stage 0.97 Picture Drama, which, unlike Turn 12.06, was NOT included on the Funimation box set released in October this year. Sooooo I also did a translation of that! But for now, the script.

(Hopefully I've tagged this correctly. Since it's a script for what was supposed to be an episode of the anime...)

I finally got around to finishing off my translation for the interview in the Beat in Ashford magazine! 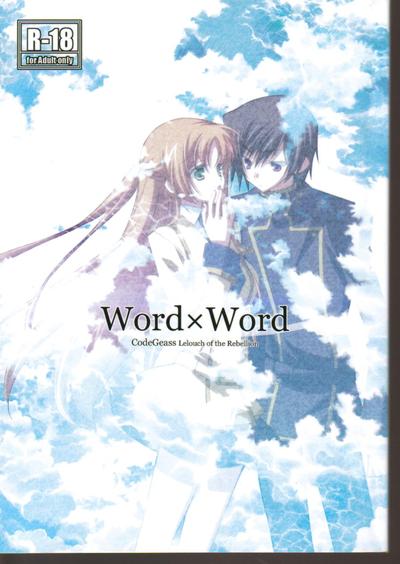 Title: Word x Word
Creator: Shiokaze-Kaidou / Ru Suina
Pairing: Lelouch/Shirley
Rating: NC-17
Size: 22 MB
Genre: Romance, Fluff, Drama
This is the Lelouch/Shirley doujin. Others have Lelouch/Shirley in it, but this one is all about them and includes a lot of sweet romance. I hope you enjoy.

yinake posted here, though the links no longer work. The Japanese version is up on E-Hentai here.

Hope you enjoyed it! If people are interested, I might translate other routes. I was thinking Lelouch's Ashford route since it's the only happy Ashford ending you can get (and because Lelouch) or just random funny scenes. I'm always up for suggestions/requests though!

Event 7 (A sappy moment)
Event 8 (Teasing... or a bad end)
The wedding ending

I didn't mean to translate so much of it so soon, but I'm procrastinating for my midterms. >.>

Btw, there's a total of 8 events + the ending for this route.

I know the game is rather old, but I kind of decided to do this on a whim today.

It's a translation of the first 2 events of Lelouch's blue moon route in the PS2 game Lost Colors + what happens when you use the geass on him in that route. It includes the text for all the possible choices and I included links to gameplay videos.

You can find it here

Thank you all for all the new info on the Lelouch Birthday event! I thought I'd do my share by doing a brief translation of the 30 min drama. :) Forgive me for not translating line-to-line. ^^; There are still a few lines I don't understand completely but be assured that I know what I post. :P

Um...only doing this because I looked around and it didn't look like someone fully translated it so. Owo; Forgive me if it were done already.

Okay, based on this image, which is from the picture drama on the last DVD (thanks to

libekory and I translated the text on the side of the images...


Image 1: In a Knightmare development laboratory somewhere in Japan. The Guren's right arm has been remodeled into a drill, with Kallen as the test pilot. The one responsible for this development is Rakshata. Even though there is no longer an imperial family to serve, it seems that Guilford -- whose eyesight has completely recovered -- continues to stand by Cornelia.

Image 2: The last time we saw them, they were near Britannia. Nina, Lloyd, Cecile are working at the same research and development institution. Arthur has been taken in by Cecile, who has brought him along. In front of Nina is a dubious-looking treat made by Cecile. Nina is on a long-distance call with Milly, who is still a reporter in Japan. Gino, who is no longer nobility and no longer a Rounds, has decided to go on a trip around the world, and seems to have just returned from Central America, from his attire.

Image 3: It seems that a little time has passed since the last time we saw the United Federation of Nations. The representatives of every nation represented in the UFN have gathered to for this conference.


It looks like they might be repurposing the Guren for construction work or something... Gino is a doof, as always. And who is that little blonde girl next to Nunnally?!

Hey there, I recently made a translation of Kaguya's character song 'Hateshinai Mirai' so I thought I might share it here with everyone. Link goes to my lj.

(...I wanted to live for your sake alone)
Scans here.